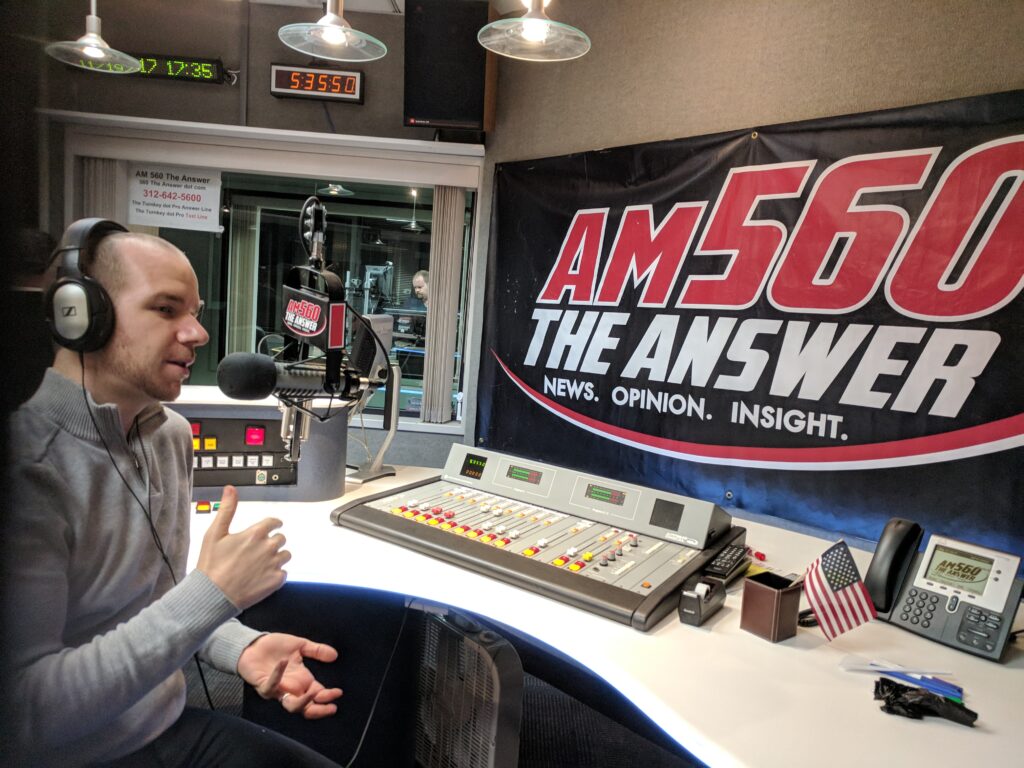 Dr. Shalom Klein is a highly regarded community activist and entrepreneur who hosts the popular “Get Down to Business” radio show in Chicago. Dr. Klein has done extensive work researching education in Haredi communities and providing supplemental opportunities for ultra-Orthodox students.

Dr. Klein spoke with Hannah Miller about his unique career path, what motivates him, and his advice for bettering the future of Haredi men.

“I grew up in Skokie, IL in an Orthodox home. My family, like so many others, went ‘shul shopping’ and ended up at the Chabad in Skokie. It was a comfortable place to be. I went through day school, high school, and yeshiva… all through the Chabad system.”

While in day school, Dr. Klein received about two hours a day of secular education, the rest of his school day being filled with Judaic studies. Once he reached high school, secular studies were completely eliminated and the school day was devoted exclusively to the study of Talmud and Torah.

From an early age, Dr. Klein suspected that his education was not what it should be.

“At around 3rd or 4th grade I started to notice that something was wrong with my education. My teachers knew their topics to some extent, but there’s a difference between knowing your topic and knowing how to teach it. My dad also recognized the shortcomings. But it was always, ‘Well, if we want you to have the best religious experience, we have to compromise.”

Rather than compromise on his religious education, Dr. Klein’s parents opted to keep him in the yeshiva system, while supplementing his education at home.

“My parents, both of whom were working full time and beyond, always prioritized reading, writing, math, and ensuring that I would always be comfortable in the world around me. That was very important in what would ultimately become the next step in my personal and professional journeys.”

While Dr. Klein intended to go on to rabbinical school, his plans changed after moving to New York.

“In New York I was hired by Chabad.org. That was a turning point for me because I realized you don’t need to be behind the pulpit in order to make an impact in the community.”

After a few years in New York, Dr. Klein moved back to Chicago to join his father in their family business. That’s where his journey took a turn.

“When I moved back to Chicago in 2009, in the midst of a tough recession, I saw that many people, particularly in ultra-Orthodox communities, were out of work. I started to realize how many people in these Haredi communities are on welfare. I wanted to be a part of breaking that cycle.”

Dr. Klein’s determination to help improve the Haredi community led him to establish several Jewish business-to-business networking nonprofits. Through these organizations, he created a series of events and programs that would allow people to brush up on their skills to compete for available jobs.

Over the course of about 6 years, the non-profits Dr. Klein created brought in over 50,000 people. His successes drew national attention, which led to several dozen invitations to the Obama White House to discuss methods of conducting social innovation in faith-based communities. These experiences furthered Dr. Klein’s desire to make an impact in the Haredi community.

Dr. Klein knew that education was an important part of taking the next step, so he accepted an invitation to a certificate program in Jewish leadership from Spertus Institute, in partnership with Northwestern University.

“Until that point, I never learned about management and leadership specifically through a Jewish theological angle. In the ultra-Orthdox world, you never have those conversations. It’s all just, let’s learn Torah.”

After finishing the certificate program, Dr. Klein was invited to attend a master’s program at Spertus, despite the fact that he had never received a Bachelor’s degree. For his Master’s thesis, Dr. Klein created a job training program for Haredi high schools in Chicago.  As beneficial as the program seemed, it wasn’t always easy to get Haredi schools to agree to let Dr. Klein in.

“It took some rabbinic intervention of having some people vouch for the fact that I’m not trying to change anybody’s philosophy. It’s simply about how do we create a community that is not on welfare… a community where people are earning an honest livelihood rather than having to take a [welfare] check. Isn’t that something we can all agree on?”

But, while the leadership may have been initially reluctant to allow Dr. Klein into their schools, ultimately, the students benefited from his assistance.

“I’m still hearing from some of the alumni of the program that, yes, Shalom, you really helped me find my first job. I interviewed because of this and I actually pursued this career path because of that speaker you brought in. That makes it all worth it.”

For his doctorate, Dr. Klein continued looking for ways to improve Haredi employability, which led him to conduct a qualitative study of education focusing on ultra-Orthodox Jews in the workforce.  The key finding of the study was that 50% of the participants indicated that Haredi men educated in yeshivas were unlikely to succeed in gaining competitive employment and that the primary reason for unemployment was a lack of core education in yeshivas.

Dr. Klein knows things can change. He says that better leadership, quality of education, role models, and increased opportunities are key to helping the Haredi community be more self-sustaining.

“We need to embrace a culture of learning and growing, in both the formal education sense, and also in the informal sense, with a willingness to embrace the knowledge from others. Schools don’t have to compromise in any way on the priorities of Jewish education. But we do need our education systems to evolve to ensure that future leaders are best positioned for business success, for community success, for leadership success.”

Despite Dr. Klein’s enthusiasm for improving the Haredi community’s employment prospects, the situation remains rather bleak. Tens of thousands of young Haredi men are poised to enter the workforce with few skills and very minimal English abilities. Today, 42% of the Haredi population in New York is poor and 16% are near poor. Still, Dr. Klein sees room for hope.

“Don’t accept the status quo. Don’t just say that things have always been done this way and that’s just how it’s done. Just because you went though yeshiva and maybe now you’re in your 30s or 40s, there’s still an opportunity to learn and grow and be the change. Roll up yourself. Make it better for somebody else. Where some see challenges, I see opportunities.”

One important way to help provide opportunities to Haredi youth is to join Yaffed in our fight to make sure that every child has access to the education that they deserve!