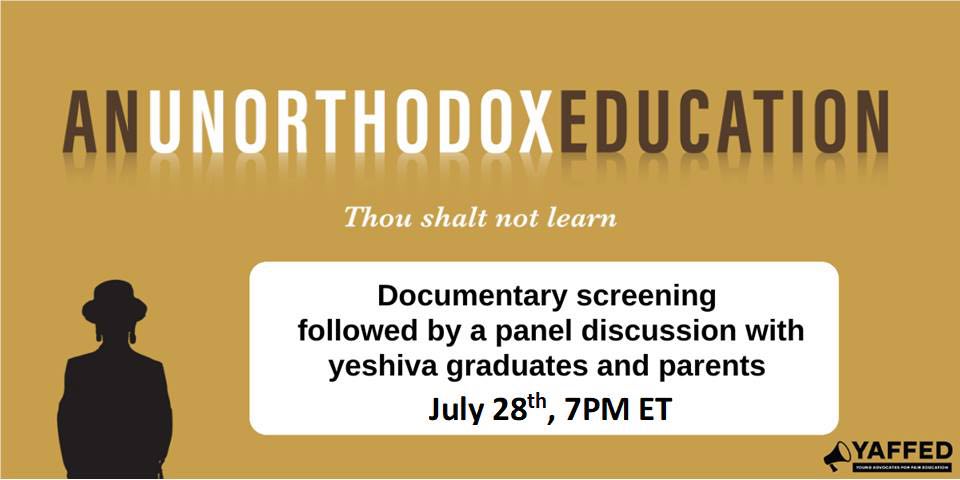 The New York mayoral race brought renewed attention to the question of the state of secular education in Haredi yeshivas. While Yaffed has been fighting for a decade to end educational neglect in Haredi schools, some mayoral candidates claimed that yeshivas provide an adequate education and that the state should not interfere.

Joe Kolman, a writer and filmmaker, believes that politicians and community leaders are doing an egregious disservice to Haredi youth by denying them an education. Kolman directed a documentary, titled UnEducated, that takes a closer look at what is happening inside New York’s Haredi yeshivas. He shared his findings with Yaffed’s Hannah Miller.

“A few years ago my wife and I invited a woman to share our home while she was studying to get her BA from Hunter College. We heard her story about how she came from an ultra Orthodox neighborhood in Brooklyn and the enormous hurdles she had to overcome in order to get to where she was. Her story moved me so much that I began work on what we thought was going to be a powerful political piece about education in the Haredi world.”

Shortly after Kolman finished his 8 minute film, the pandemic hit and the entertainment industry came to a standstill. During this hiatus, Kolman decided to interview more people and expand the film. Because of COVID restrictions, Kolman went alone to film and interview willing participants in their backyards. However, it wasn’t alway easy to find people comfortable being interviewed.

“One of the most interesting things that happened during our shooting was that we had an ultra Orthodox business man who wanted to come talk to us. We blurred the camera and turned the lens to one side so he just looked like a colored blob. He looked at that image and said ‘it’s not good enough,’ and turned his back to the camera.”

That moment gave Kolman a new appreciation for the fear that participants in the documentary had to overcome.

While those who have left the community may not have the same level of fear, it can still be uncomfortable to share details about their struggles. Despite the discomfort, several former members of the Hasidic community agreed to be filmed for the documentary. One of the most poignant stories was that of Joseph Kraus, a young man who left Kiryas Joel, the most impoverished neighborhood in New York, at 17.

Joseph was able to gain his independence by purchasing a cell phone and using it to teach himself about the outside world. When he felt knowledgeable enough, he left the community and went to a youth shelter. After bouncing around several homes, Joseph finally found himself in his current location in upstate New York. But, his struggle is far from over.

“When Joseph left, he didn’t even know how to write his own name. Now he’s trying to get a job at McDonalds and he can’t get one because he can’t read or write. It’s going to take him months just to get to a place where he can be fully employed.”

Kolman wishes that there were more resources in place for those who leave the Hasidic community.

“There are a couple generations of young people that need help getting started in life and their needs are not being met by the non-profit Jewish charities. Joseph should be able to go to a dorm where there’s 100 other people like him, where they can study, and make up for what they were denied illegally. But these dorms don’t exist. It made me angry that I was not able to find help for him.”

Even those who are able to overcome the odds and become financially independent still face enormous challenges. Abe Weiss is another former Hasid who was featured in the documentary. Abe is a prosperous businessman who grew up in the Hasidic community. Although he managed to achieve financial success, Abe still struggles to function in the world.

“When Abe left the community, he wanted to educate himself. So, he started to try to read newspapers. He had to go word by word looking up everything to understand what was going on. He now sells high end watches, but he still needs to have his wife check every single email and letter.”

Unfortunately, the stories that Kolman showcases in UnEducated are not unique. Over 40% of New York’s Haredi Jews are considered poor and another 16% are near poor. Kolman believes this high poverty rate is directly linked to the lack of secular education in many Haredi schools. Young men spend up to 14 hours a day in yeshivas without learning any English, math, science, social studies, or history. Most graduate without the ability to communicate effectively in English.

“If you can’t communicate, if you can’t talk to your doctor, if you have to have your wife deal with anything in the outside world, you are really crippled. And there’s 2 generations of young people who are crippled.”

Through working on the documentary, Kolman was able to identify a number of hurdles to ending the educational neglect,the first of which are the community leaders who perpetuate it.

“We found some audio of one of the big Satmar rabbis speaking to a group. He said very clearly that he had no intention of following the state regulations and that he was going to resist any attempt to introduce secular education into his community. Meanwhile, these same community leaders are saying publicly that they care deeply and are trying to do something about this issue. The hypocrisy is incredible.”

Politicians are also undermining attempts to fix the educational neglect, according to Kolman. He notes that several mayoral candidates have vowed to maintain a hands-off approach to Haredi yeshivas in order to obtain the coveted “bloc vote.” Kolman vows to hold the candidates accountable.

“If a mayoral primary candidate wins who is for yeshivas… we’re going to hold their feet to the fire. Film them being hypocritical. It’s not going to be easy for them to ignore this issue in the general election.”

As things currently stand, much of the public is unaware of how severe the educational neglect is in many Haredi yeshivas… which makes it easier for politicians to manipulate the facts of the situation. Kolman is hoping that his film will change that.

“I hope the film makes it difficult for people to accept the lies that are being told about this issue. When they see the film and see people who have been clearly abused by the system, they won’t put up with it. And I hope politicians will see the film and have second thoughts about everything they’ve said.”

Join Yaffed on July 28 for a screening and panel discussion of An UnOrthodox Education. Check out our site to find out how you can join the movement to ensure that Haredi kids get the education they deserve.