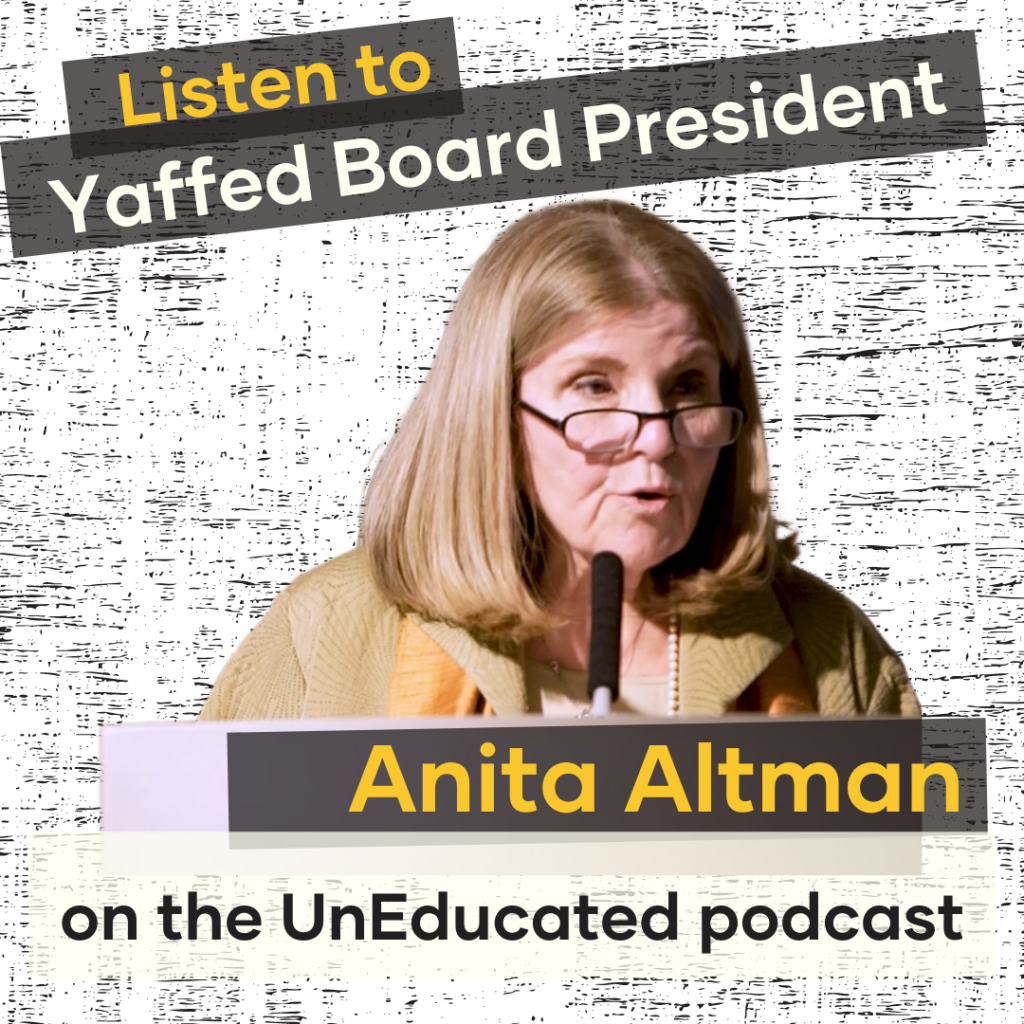 Anita Altman has been the board chair of Yaffed for the last 4 years. On a recent UnEducated podcast, Anita spoke to Hannah Miller about her childhood, her long career, and how a chance encounter with Naftuli Moster profoundly affected her life.

“I’m a daughter of the Bronx. I grew up in Hunts Point, once a working class neighborhood, which eventually became emblematic of American urban poverty. My father was a union plumber and my mother a homemaker. They instilled in me that we have an obligation to one other, and not to remain silent in the face of injustice”.

“Until his dying day, my father would say, ‘if you can help somebody, why wouldn’t you do that?’ I know that this vision has so informed how I live in the world. It was evident not only in my professional work and volunteer activities, but also just how I relate to strangers on the street.”

Kindness was a generational trait in the Altman household. Her maternal grandparents raised 7 children on the meager income her grandfather earned selling potatoes and onions in the city’s public markets, yet they were always generous with anyone in need of help.

“My family made a great impression on me. I developed a profound sense of responsibility to other people from them. I learned that our journey through this world was one in which we should strive to make it a better place, and this remains a core belief.”

Anita’s perspective on social responsibility was further nurtured by coming of age in the political climate of the 1960‘s, a time not only of great turmoil but also with a belief in the possibility of making this a more just country and world.

“I grew up at the start of the Vietnam War. I recognized early on that there was something terribly wrong with what our country was doing, and that informed my political understanding from what was happening around me… both the war and the Civil Rights Movement.”

Even as a teenager, Anita took her passion for politics to the streets of New York where she campaigned for John F. Kennedy.

“There’s an activist gene in me that really flowered as I was growing up. I had the time of my life campaigning for Kennedy. I came to understand that I loved politics and standing on street corners visiting with people and handing out leaflets.”

Anita’s passion for social justice led her away from the expected route of becoming a homemaker or teacher. Instead, she graduated from the City College of New York, majoring in political science with a minor in history.  After graduating, she set her sights on working as a city planner.

Despite the New York’s City Planning Department’s policy of only hiring people with a masters degree in urban planning, Anita was not to be deterred. It took 30 interviews before she succeeded in landing a position as a planner selecting sites for new public schools.

“It was a time of great demographic change in New York. Both Brooklyn and the Bronx were burning. There was substantial additional federal funding coming to the city for developing all kinds of new programs and projects, some of which I worked on in my job.  It was such an exciting, dynamic time,  which came to an abrupt end as a result of the Vietnam War.“

Anita’s life was changing as well. She married a man who had cystic fibrosis, a devastating genetic disease, which gave her an up-close view of dealing with our challenging healthcare system. She was determined to try to make a difference.

In the early 1970’s there were a number of prison riots in New York, and the lack of adequate healthcare was high on the list of prisoner complaints. Anita was working for the City’s Health Department and had assumed the position of capital planner for the prison health system.   Under an affiliation contract with the city, Montefiore Medical Center became the provider of healthcare services on Rikers Island, while Anita had the responsibility for upgrading the health facilities in the jails there.  The success of their work on Rikers Island resulted in The Joint Commission on Hospitals first accreditation of a prison health service in the country.

Years later, Anita joined Montefiore’s staff working on the reconstruction of this major medical center. Subsequently, Anita accepted a job in the Government Relations department at UJA-Federation of New York. Despite being a life-long New Yorker, Anita was stunned by how little she knew about the extensive network of service agencies founded and supported by the metro area’s Jewish community, with many now non-sectarian, serving the general New York community as well.

“I felt like an accidental tourist. There were people who had only worked in the Jewish community and there I was with 20-plus years of a career behind me, sort of stumbling onto this organization that ultimately ended up providing me a remarkable platform to do some of the most important work of my career.”

Anita worked at UJA-Federation from 1987 to 2015. In 2003 she was introduced to the founder of Footsteps, an organization established to assist Jews who had left or were considering leaving the Haredi community.  Through an extraordinary bequest, UJA-Federation established a scholarship program for economically needy Jewish college and graduate students, which Anita staffed. It began offering scholarships to any Footsteps member who was accepted into college or graduate school.  Naftuli Moster was among those who applied.

In the application form’s biographical essay, Naftuli described the struggles he had leaving the Hasidic community at age 20, anxious to attend college but with no high school diploma, broken English and a most limited knowledge of secular subjects. He described his challenges obtaining a college degree, which ultimately led him to research and discover that there is a New York state law mandating that all non-public school children receive a secular education. He wrote about YAFFED, the organization he founded to advocate for the education of Haredi youth.

Anita was so moved by Naftuli’s story that she invited him to visit her at UJA-Federation where they began their enduring  friendship. When Anita was ready to retire from the Federation, Naftuli reached out again.

“Naftuli came to me that summer [of 2015] and said, ‘Although I went to school to become a psychologist, I can’t give up this work. This is too important. And the problem is we don’t have any money and I need to earn a living. Can you please help me find a way?’ And that’s how my work with Yaffed began.”

Anita immediately began to find ways to assist this fledgling organization. Her first accomplishment was to secure a donor, who not only gave Yaffed its first grant, but office space as well. Although Anita believed deeply in Yaffed’s mission, she was adamant that she did not want to be on its board.

“I was not interested in joining a board. But I did offer to help if called upon. So, there came a moment when Naftuli reached out and urged that I join, and I said, ‘ok,  whereupon he said, so now you’re the president!’ And that’s how I became president of the YAFFED board.”

When Anita joined the board, Naftuli was the only person on staff. Now, the office has grown to six full-time employees and an intern.

Anita’s work at Yaffed is consistent with her lifelong devotion to social justice. She looks back on her long career with gratitude for the opportunities to help realize her passion to do meaningful work and contribute to securing a more just world.

“I really feel blessed. I’ve had an extraordinarily rich and very satisfying career. There are times when I pinch myself. I so often think of myself as the plumber’s daughter from the Bronx, who when growing up could never have imagined the life I would lead.  I know that I have made an impact on the lives of so many people for which I will be forever thankful.”

When asked about why she chose this particular issue to focus on in her retirement, Anita answered, “It may seem like an odd issue for an Upper West Side Jewish feminist activist to have taken on, but I did it because I truly believe this is sacred work.  Today, there are tens of thousands of individuals who are deprived of an education that would help enable them to fulfill their potential.  I wonder how many more Naftulis are among them, who have such incredible untapped talent, who could contribute so much to our society.”

Find out more about how you can help Anita and Yaffed on our mission to ensure that every child in New York has an opportunity to fulfill their potential.