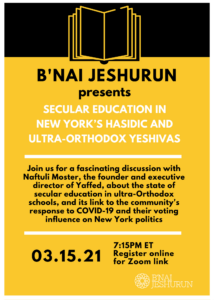 Tens of thousands of Jewish children attending ultra-Orthodox and Hasidic yeshivas are currently being denied a basic education. This fact was confirmed by the findings in New York City Department of Education’s 2019 report on their yeshiva investigation, which was routinely stalled due to politics. Appallingly, this well-documented form of educational neglect continues; the issue remains unresolved on the City or State level.

Join YAFFED’s founder and Executive Director, Naftuli Moster, for an in-depth exploration of the state of secular education in Hasidic and ultra-Orthodox yeshivas in New York and its enduring impact on yeshiva graduates, parents, and New Yorkers. This conversation will shed light on the link between lack of secular education and resultant responses to COVID-19 in Haredi communities and the ultra-Orthodox vote’s influence on New York politics, as seen most recently and vividly in mayoral candidates’ discourse around the topic of yeshiva education.

Naftuli Moster is the founder and executive director of YAFFED, a non-profit advocacy group working to improve the secular education in ultra-Orthodox and Hasidic yeshivas in New York. Born and raised in a large Hasidic family in Borough Park, Brooklyn, he attended Hasidic yeshivas his entire life. At the age of 20, Naftuli decided to pursue a career in psychology, which was when he first encountered the challenges resulting from his poor secular education. While he fought through and completed a BA in psychology and a Master’s in social work, he was determined to make things better for future generations, which led him to found YAFFED in 2012.